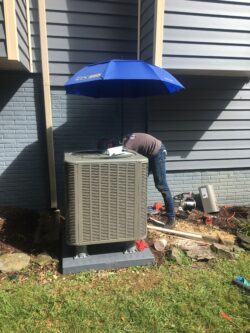 If your air conditioner isn’t giving you the best possible service, it could mean you need repair. When you can address issues early on, you won’t have to worry about being left out in the heat. After all, no one is happy when the air conditioner is down and it’s 90 degrees out. Not to mention the health risks that it exposes to our children and the elderly to. Don’t sweat it out – call us at Dave’s Cooling & Heating. We’ll thoroughly assess your system to make sure that it is fixed, and we’ll also make sure that it is most efficient.

If you have noticed one or more of these problems with your air conditioner, don’t delay – call for service immediately. The sooner you call for service, chances are you can prevent a total breakdown of your system. The longer you wait to fix the problem, the costlier it can be. Whatever the problem may be, we’ll send out a technician to ensure that everyone is comfortable again.

Call us at (301) 401-2780 for air conditioner repair service in Frederick, MD and surrounding counties today! 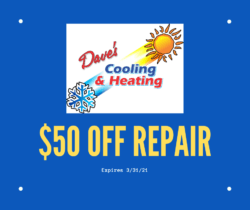 Have any questions or want to schedule a service call?

We Service All Makes and Models

Todd Hansen
18:22 13 Dec 21
The staff at Dave’s was very quick to respond Monday morning for the water heater replacement we called in Sunday morning. Great help from the front office and their excellent technicians.

Jessica Otero
19:15 29 Nov 21
Dave's Cooling & Heating was excellent to work with. They were responsive and well organized in their communications, speedy to book our estimate appointment, and worked to meet an important deadline we were up against. They went above and beyond to make sure we received the right service and equipment for what we wanted to achieve and never tried to oversell. They are a great company to work with and we will definitely use them in the future. I highly recommend.

charles clark
18:32 04 Nov 21
Hands down Dave's Cooling & Heating have the best people that work for them.I was recently shopping around for a new Heatpump system for my house. After contractors that did not respond or the ones that did were priced so high they clearly were only interested in taking advantage of the pandemic to inflate prices that were unrealistic, I found CarlCarl, the estimator ,made sure we were on the same page so there was no misunderstanding. He gave me a complete estimation, with everything listed and priced, and gave me time to think about it. He came to the house three times before I sighed the contract. Not once did I feel pressured by Carl , more like I was talking to a friend than to a salesman .After signing the contract I was scheduled for the install in less than a week.The installers Romy and Jose were just as friendly. They didn't have that attitude of hurry up and get it done and leave. They made sure as they were working that everything wasdone perfectly and didn't leave until the system components were tested to work and perform like they should. They, too ,were friendly and personable. I really liked this group of guys and I have made friends out of this experience!I almost forgot to mention…The office personnel was also very polite and responsive!I would recommend them to anyone!!

Mary Fox
14:59 03 Nov 21
So glad we used Dave's heating and cooling to replace our 20+ year old HVAC unit. From the very first contact with Carl who visited our home several times to measure and make sure everything was right. He explained all of our options thoroughly and answered all our questions. Dave's offers financing options and discounts for paying in full. Our unit was installed by Jason and Jose who were very professional and did a great job. We highly recommend Dave's Heating and Cooling.

Frank Abrecht
19:51 21 Oct 21
Forty five years in the building industry I have dealt with many contractors, I have to say that the representatives from Dave's are professional, courteous and knowledgeable. From the first visit to review our house for an estimate to the last day of install I was treated as a valued customer and kept informed every step of the way. I would highly recommend them as I have a specialized system and they replaced and repaired as needed at a reasonable price.
‹
›
Read More Reviews